That’s a wrap on another year! Can you believe this is our second Year in Review blog post? It’s so rewarding to look back on everything that has happened in a year (link to last year’s post here). This year has been a tough year for many. However, we want to take this opportunity to reflect on the milestones we’ve hit rather than wondering about what could have been.

Last Christmas we had just launched our Saison. It seems it has become an unintentional tradition now to release something special during the holidays. It was so nice to have a few bars reaching out to us interested in bringing in our first beer. And maybe even more importantly, it’s received a warm welcome from our neighbours and in our home community, something we couldn’t be happier about.

The first thing we did in the new year of 2020 was to package some of our barrel aged beers. The Flanders Red blends more specifically. Mixing and choosing our favourite blends was a lot of fun and got us really excited to build out our barrel program more. Little did we know what was in store for this beer.

It was then that we were also presented with the opportunity to take over the farm market that used to be a part of our farm. This was an opportunity we couldn’t let pass up as it would be the perfect complement to our farmhouse brewery. 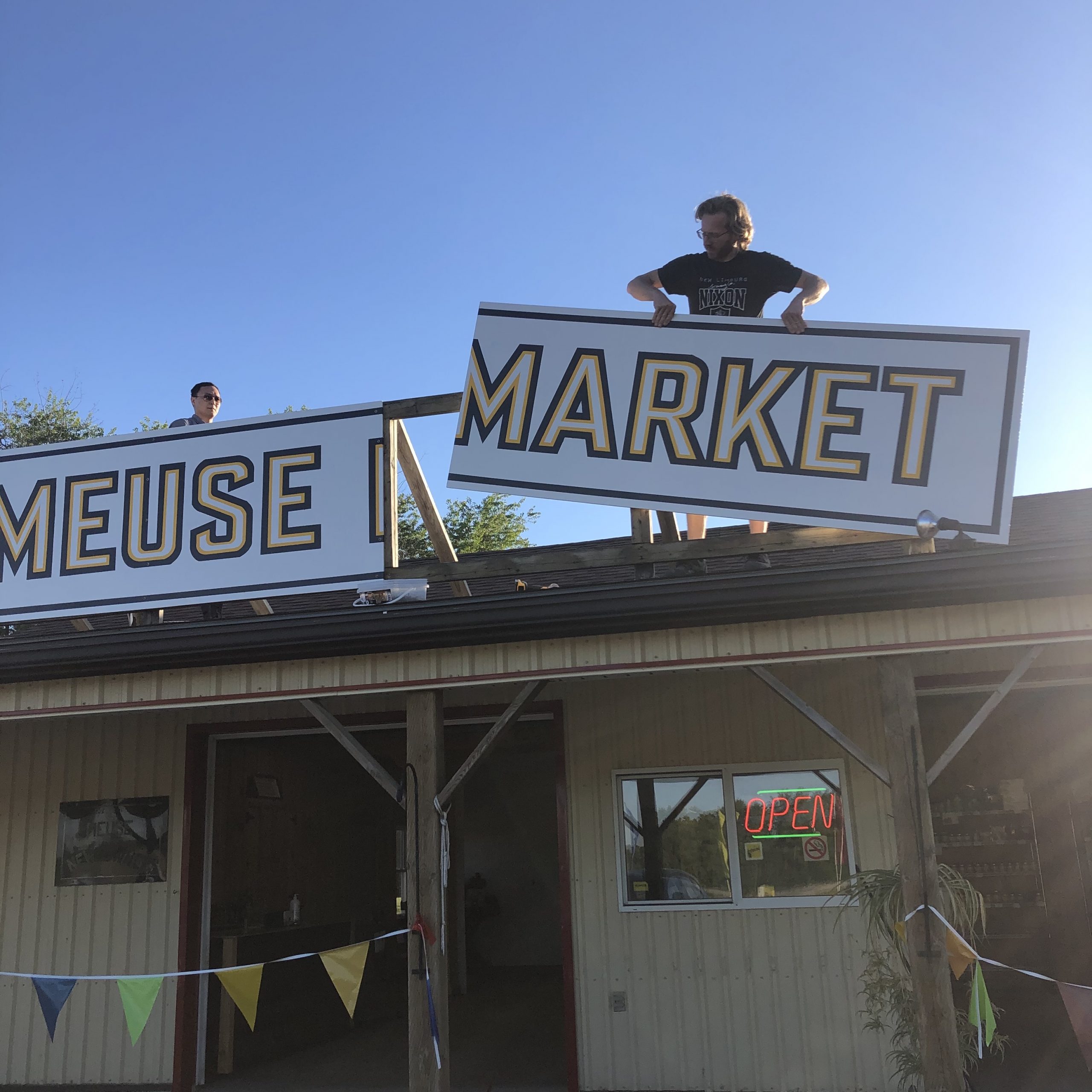 In February, we released our first batch of Cherry Saison for Valentine’s Day. Can you remember a time before covid when you could just go out for a beer guilt free? We were so excited to have our second beer out, and it’s still one we enjoy this winter. Did we mention it is made with locally grown sour cherries? It was around this time that we also started playing around with our recipe for the Extra. This farmhouse pale ale was designed to showcase some locally grown hops.

After having celebrated our one year anniversary on the farm, our building permit was approved for renovating our Quonset into our own brewing space. We received our first building materials to get to work! You can ask Mischa how much fun he has had with that this year. 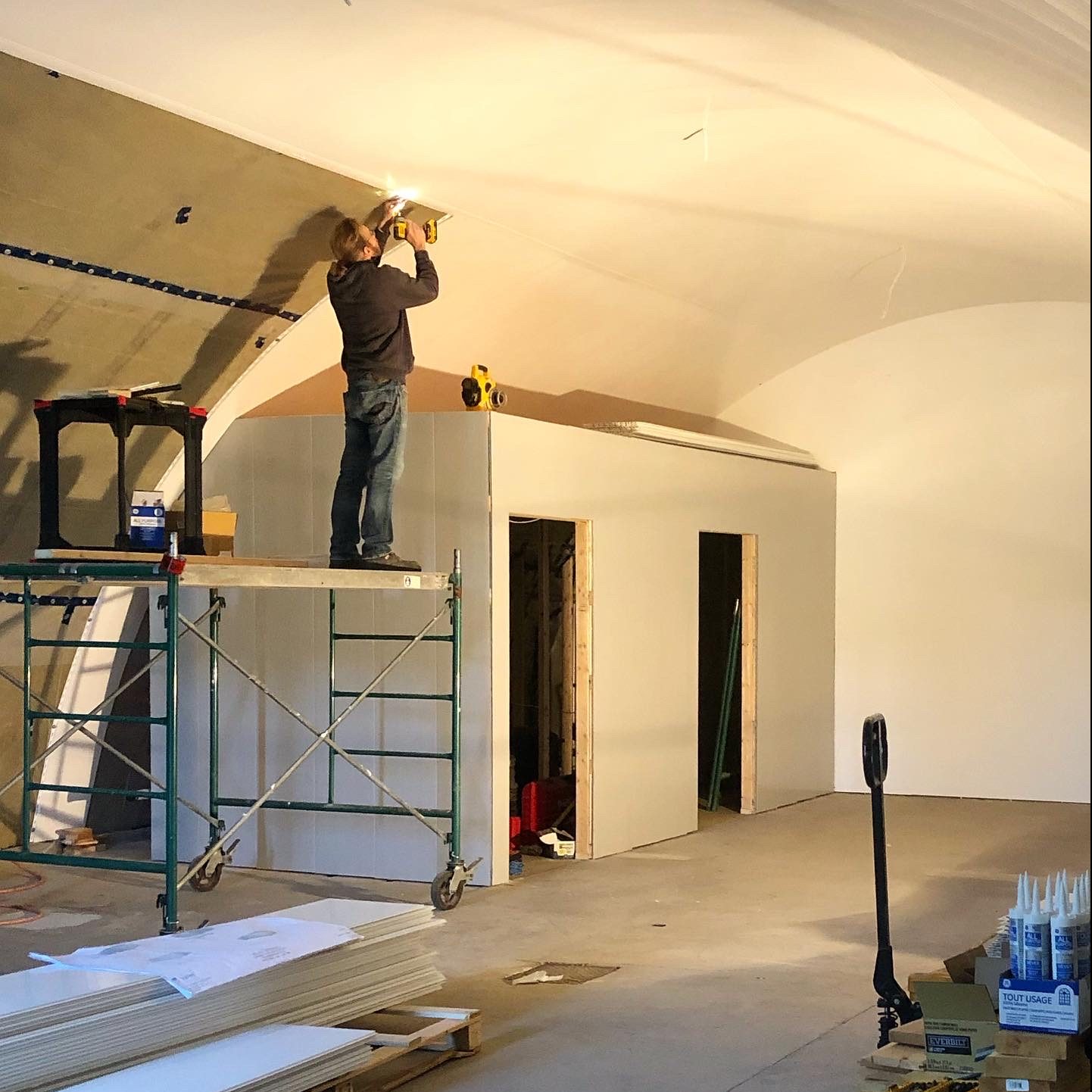 And because building a brewery wasn’t enough, we also put together our eat and drink Norfolk booth. This is a great local event that happens in April every year where we could share our newest beers. However, this year had other plans and we would soon get the news we would not be able to use it how we had anticipated.

On March 16th the pandemic became very real. It was that day we went to the grocery store to find empty shelves, something we had never seen before, and knew things were getting serious. The virus had started to get some attention, but now it was getting real for us in rural Ontario. The next day a state of emergency was declared. Bars and restaurants were ordered to be closed. This was a real shock for us, as this was still the only place for us to sell our beer.

We had a bit of light in the darkness when our Saison was approved to be sold through the LCBO at the end of April. We hadn’t expected to get into the LCBO in our first year, but we are so happy to be able to share our beer in this way. We want to thank everyone who has been able to pick up a bottle of our Saison to try.

In May the decision had been made to go full in on the farm market. Seeing how getting beer out would be tricky and not wanting to promote people to go out, we now had the opportunity to offer our community an alternative to going to the big box grocery stores. The learning curve was a steep one, but with the help of some motivated individuals and the local farmers, we were able to figure things out. We learned a lot about all the locally available produce. You can check out our Instagram account here to follow along on that journey.

In July, our first crop of barley was ready for harvest! We could finally see our vision for the farm taking form. On farm-grown ingredients for our farmhouse brewery. We sent it off for malting and got it back in November. We were able to brew our first batch of Saison with our home-grown barley, which we bottled about a week ago. The recipe may still need some tweaking but we are so excited to take that next step toward making farm-grown beer!

September 12 we were delighted with our first award at the Canadian Brewing Awards winning silver in the Belgian style sour ale category for our Mueuze. It was such a rewarding experience as this is the beer that sparked our brewery. The Belgian Gueuze style beers are some of our favourites. 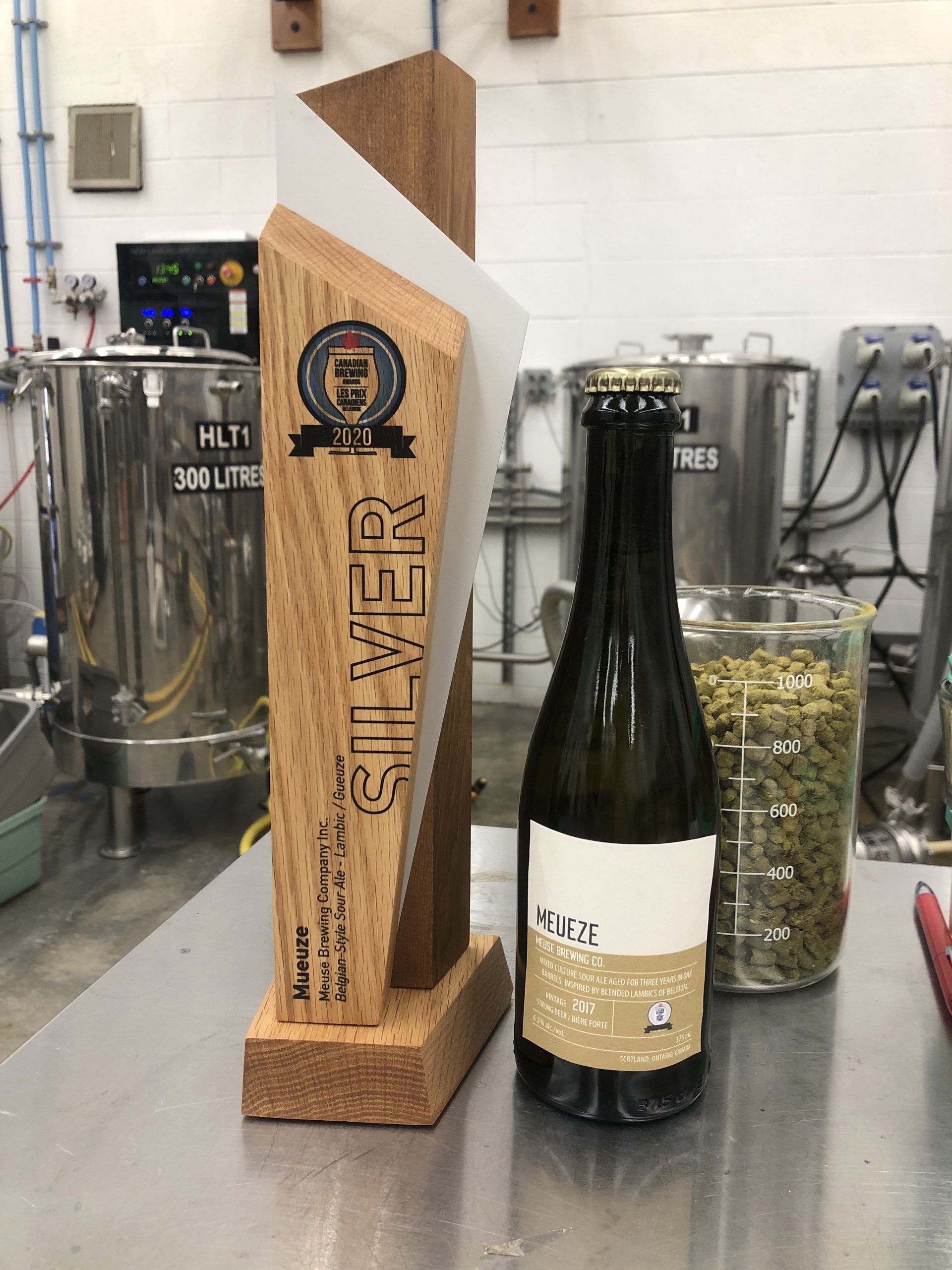 This motivated us to take a road trip in October to pick up an old dairy tank that we will use as a koelschip. This large shallow open tank will cool wort while leaving it exposed to yeast and bacteria in the evening air to ferment the beer. We are so excited to break it in in the new year! 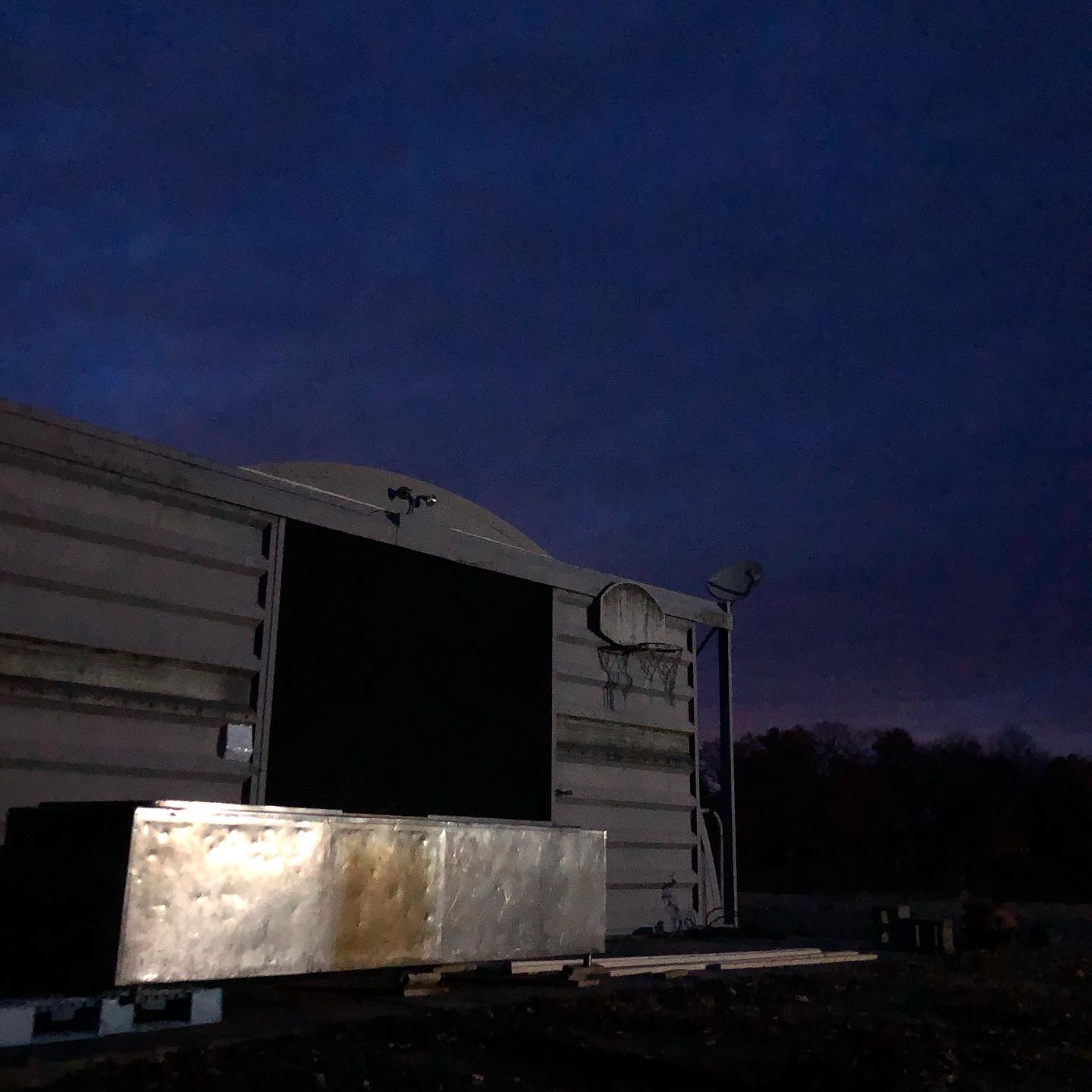 At the end of October, we got to take part, virtually, in the Ontario Craft Brewers Conference. It’s always great to connect and be re-invigorated by people so passionate about our industry.

November 14 brought our next big surprise. Winning three awards at the Ontario brewing awards. Silver and gold in the European sour ale category for our Mueuze Cuvée and Rouge Cuvée respectively. The Rouge Cuvée ended up scoring the highest out of all the entries earning it the Best in Show award. This was something we never imagined achieving in our first year.

This pushed us to release these beers early. Initially, we had thought to hold onto them until our own retail shop was open, but with these awards, we really didn’t want to wait. We couldn’t be more grateful for everyone who got a bottle during the holidays and are so excited to get reactions from those who have tried these beers that are at the heart of our brewery.

We topped off the year with a more personal milestone. We got engaged! Starting a business together, buying a house and a farm. You can say we’re pretty committed.

Even though this past year had the unfortunate undertone of a global pandemic there is still a lot to be grateful and thankful for. First and foremost, this year has brought into perspective how important it is to appreciate the good health of family and friends. We may not have been able to open up our brewery retail like we had hoped this year, but we were able to meet so many people in our community through our farm market. We may be missing our close friends who we couldn’t see this year, but we can look forward to seeing them again when it is safe to do so.